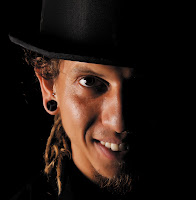 “Funnykito” is a captivating and enchanting comedy magic and illusion show, created and performed by the highly skilled Brazilian artist Dan Marques.   Lasting approximately 45 minutes, the spectacularly engaging “Funnykito” show can be performed in the theater or outdoors, and will be sure to impress audiences of all ages.
With its laugh-out-loud comedy, unbelievable illusion and fantastic physical theatre, all performed to a relaxing, feel-good soundtrack, “Funnykito” transports the audience to a happy, joyful and magical world.

Using the universal language, the magician Dan Marques’ mesmerizing skills attract attention and maintain the concentration of all, as virtually impossible things happen before the audiences’ eyes.  “Funnykito’s” audience is treated to unsurpassed interaction, with hilarious audience participants, always included in a very surprising and funny way.

The highly successful “Funnykito” show has made audiences cry with laughter all over the world, having been performed in festivals, at parties and on main squares in over 45 countries across the Asian, African, European and American continents. This one man show has also won numerous prizes worldwide, including the first place in the World Championship of street magician in Germany 2017,
first place (publikumpreis) Sarmende Theater Fair 2015 (Italy), the first place (PublikumPreis) in the international competition of street performace Bamberg Zaubert 2014 (Germany), a price in the international competition of street magician St.Wendel 2013 (Germany), Pinneberg 2013 (Germany),  Usedom 2011 (Germany) and special price in Vevey 2011 (Switzerland).


Come and enjoy the magical moments of the unique and unforgettable "Funnykito" show.